Your source for guidebooks on Yukon rivers

In the spring of 1940, Laurent Cyr and Boyd Gordon of Whitehorse began working on a small gold dredge which they had designed. The machinery was to sit on the 32’ x 18’ x 32” hull which they had constructed and fitted with a 1930 Caterpillar tractor engine to drive the 23” propeller (the craft had only forward and neutral so a small launch secured to its side provided reverse and any other additional power the barge required while under way).
When they got under way in July they found the elevator tunnel caused so much turbulence that they had to cover it with a steel plate to be able to continue safely. The machinery itself consisted of 20 2/3 cu. foot buckets (purchased from Dominion Bridge Co. of Vancouver) mounted on the track links of their cannibalized Caterpillar and fitted to a 23’ boom. The transmission and final drive of the Cat were converted into a winch, the drum being mounted where the track sprocket originally was. Mr. Cyr explained how he had hand chiseled the old cast iron housing off to facilitate the adaptation.
The buckets were driven by a belt connected to a 4 cylinder Star car motor which apparently went through almost as much crankcase oil as it did gasoline. A driveshaft off the motor powered a worm gear which on one side ran a winch and on the other the conveyor to take the boulders, etc., out.
A four foot diameter bull wheel (which came out of a Yukon Electric steam boiler from their power plant) had to be increased in size after first test runs. (While enroute they stopped at Shipyard Island to use lumber from the old ways there.) The separator drum or grizzly was 3’ x 6’ with 1/4” holes to allow the gold to fall through and was supported by rails and rollers. The sprockets which fed the bucket chain were ingeniously notched (their own design) to shake each bucket as it came around empty. This ensured any clay or mud would be shaken loose leaving a clean bucket for the next pass.
They traveled down the Yukon River from Whitehorse in late July of 1940, going a short distance up the Teslin River to try their luck. Here they found that the tailings elevator turned so fast that they were literally firing gravel off the dredge. They rectified this problem and continued on down the Yukon River, trying spots along the way. At Gold Point miners on shore fired a warning shot over their head to inform them that this ground was taken so they moved a little farther downstream.
The way in which the dredge worked was simple enough. The buckets went around scooping up gravel as they worked their way along the shore, dumping it into a rotating drum which allowed the heavy gold to drop out through holes in it. A separate gas driven water pump washed the gravel as it turned and the worked gravel was discarded.
As they worked along the river bank they would first have to clear the brush and pull any stumps in the way. The dredge was capable of digging down 12-13 feet but the most profitable ground was in the top 1-2 feet so usually they just scratched the surface. In about three weeks of actual dredging the two took out about $2300 in gold at $32/ounce. 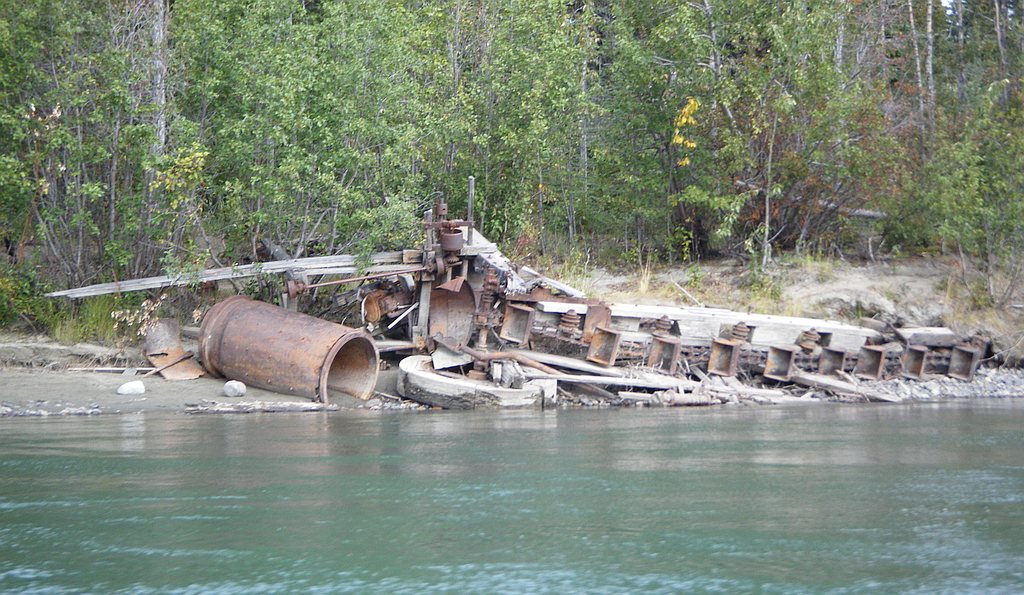 The dredge however had cost them over $10,000 to build. When winter began to set in they winched the whole unit up onto the bank and dug it in for the winter. It still sits there today.
Laurent Cyr had plans to return the following year with another partner (since Boyd had decided not to go back) but an agreement could not be reached between the original partners so it was never used again.
The condition of the dredge is steadily deteriorating.

We have 33 guests and no members online